Steadily rising prices of ethylene between mid-April and mid-September caused many buyers to turn to alternative sources, but a recent pullback in the market has rekindled interest.

Ethylene offtake this month is currently around 172,825 metric tons, and compares to 253,399 Mt in October. Ethylene prices on the US Gulf Coast rallied more than 225% between a low in April near 8c/pound and a peak in September at more than 26c/lb. At that time, buyers reacted through a combination of reducing purchases, working off existing stockpiles or possibly turning to more locally produced ethylene with feedstocks such as naphtha.

Gulf Coast ethylene prices have fallen since early September to nearly 19c/lb, which is helping to spark global demand again. Belgium’s discharges are running at a pace of 1,339 Mt/d this month, compared to 829 Mt/d in October, thanks mostly to Ineos’ Antwerp terminal and Total’s Antwerp refinery.

China imported 31,259 Mt of ethylene so far this month, compared to 43,301 Mt in October. Chinese imports may be bolstered by the drop in ethylene prices, along with the possibility of a near-term price increase, after the outage of LG Chem’s 1.6mn Mt/yr cracker in Yeosu, South Korea on November 5. The cracker is expected to remain shut until January. Two of the Chinese cargoes that discharged this month were loaded aboard MGCs at Enterprise in Morgan’s Point, while single SGC discharges were made from vessels loaded in Ruwais and Singapore. 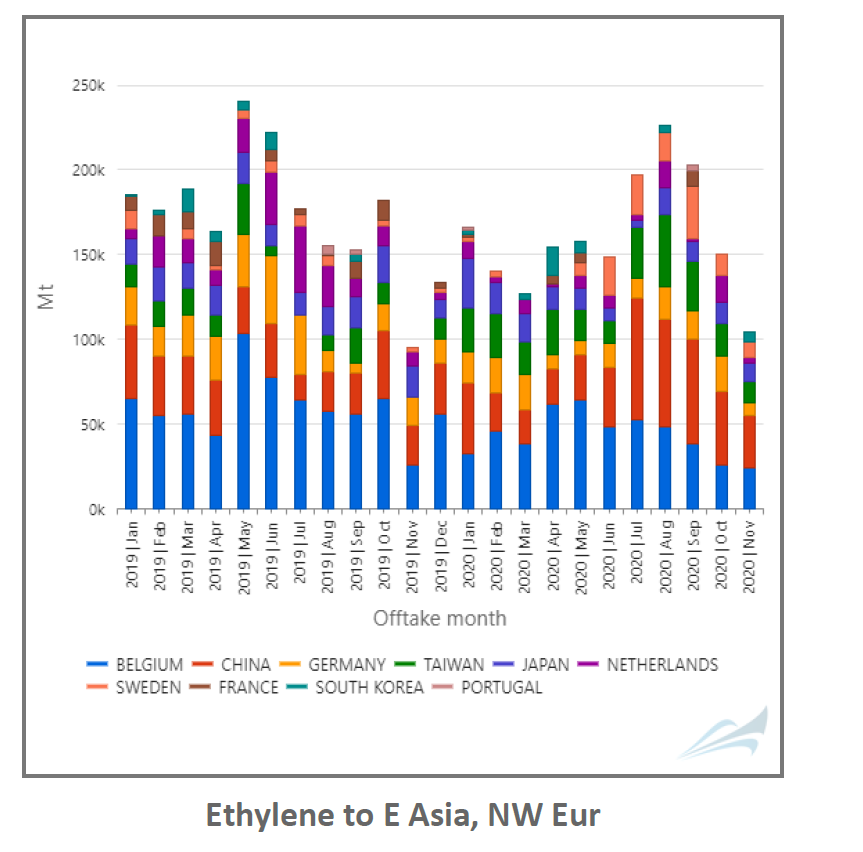 Tom Pawlicki is a Senior Oil Market Analyst at ClipperData, and he specializes in reporting on LPG and Olefins.

Matt Smith deciphers and distills what is most relevant across the energy complex into cohesive and pithy knowledge you can use. The belly laugh is a bonus.

Amir Richani is a geopolitical analyst at ClipperData, with a voracious appetite for studying political, economic and social developments in Latin America.

Tom Pawlicki is a Senior Oil Market Analyst at ClipperData, and he specializes in reporting on LPG and Olefins.

Andrew, our resident Scotsman, joins our team providing color to reports ranging from global gasoline to the IMO sulfur cap.

Josh Lowell is an senior energy analyst at ClipperData. He specializes in marine fuels, and is known for talking about IMO2020 in his sleep.

Olivia Liu is ClipperData’s senior agricultural analyst. She combines her wide-ranging experience in global grains and oilseeds with analytical prowess to provide unique insights into the ag markets.

David Arno is a Senior Oil Analyst at ClipperData, and is particularly enthusiastic about global flows of crude and sports.